Known as the soprano who most performed in Pablo Casals’ magnum opus, El Pessebre, as well as interpreter of his art songs, Olga Iglesias was born on March 22, 1929 in San Juan, Puerto Rico. The youngest of eight children born to Rafael Iglesias Normandín and María Victoria Antoni Rodríguez, Olga Iglesias was exposed to music through her older siblings who played the piano and the violin. Showing talent in singing at an early age, at 14 she began studying with renowned Puerto Rican tenor, Antonio Paoli, while still attending Central High School in Santurce, Puerto Rico. In 1947, Olga Iglesias made her public debut on May 4 at La Fortaleza, the official residence of the governor of Puerto Rico, during the first annual “The Week of Music”. During this occasion she sang Verdi’s “Caro nome” from Rigoletto and “Ah, fors’è lui” from La Traviata.

After completing musical studies in Philadelphia and New York, a scholarship granted to her by the Puerto Rican government, Olga Iglesias returned to Puerto Rico to begin her musical career in earnest. A musical career that would surprisingly take her on course to work as Pablo Casals' primary choice of soprano for his oratorio of peace, El Pessebre, and his art songs.

Olga Iglesias performing for a local San Juan lodge circa the late 1950s as it was being broadcasted on WAPA radio.

Marta Montáñez de Casals and Olga Iglesias circa the 1960.

José Enrique Pedreira on piano and Henry Hutchinson, Sr. on violin while Olga Iglesias sings for WAPA television in the late 1950s. 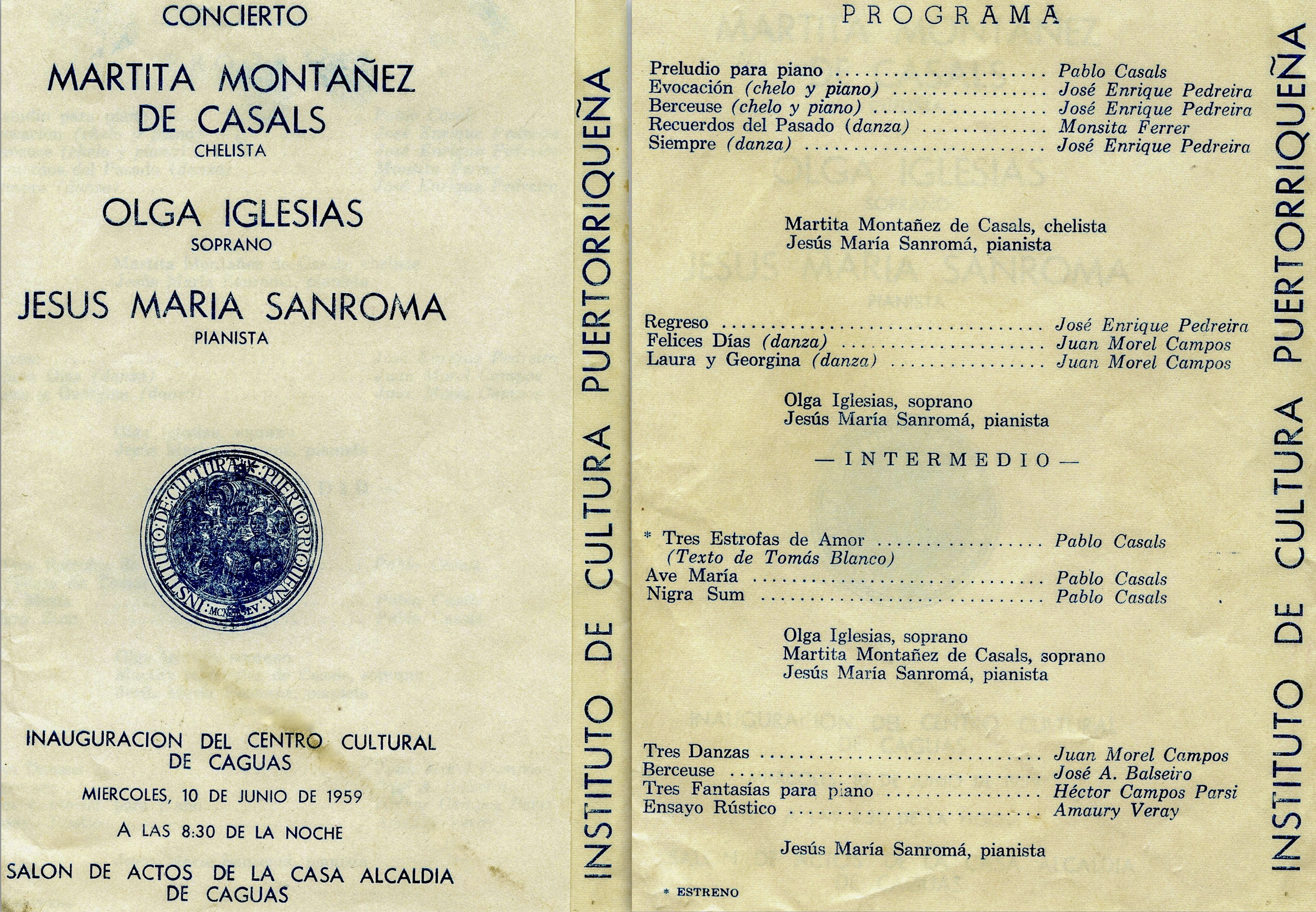 Throughout the mid-century, Olga Iglesias traversed the island of Puerto Rico giving concerts and recitals under the auspices of El Instituto de Cultura Puertorriqueña alongside Casals’ wife, Marta Montañez, cellist; Luz Hutchinson, pianist; and her husband, Henry Hutchinson, violinist, among other Puerto Rican classical musicians. Of note, in 1956, her debut album hit stores called “You Are Always in My Heart” with José Enrique Pedreira on piano and José Raúl Ramírez on organ also another album in 1959 called “Renadío del Cantar Folclórico Puertorriqueño” with Luz Hutchinson on piano. In addition, Olga Iglesias belonged to the Círculo Operático, a musical group of local operatic singers founded by Puerto Rican soprano, Rina de Toledo, and Puerto Rican pianist, Elsa Rivera Salgado, to promote the classical arts and local culture throughout Puerto Rico. In addition, Olga Iglesias appeared many an occasion on the local television stations, WIPR-TV, and WAPA-TV, as well as on radio.

Program from Olga Iglesias debut in 1958 during the 2nd annual Puerto Rico Casals Festival with Richard Burgin, conductor of the Boston Symphony Orchestra.

Letter dated 1960 to Olga Iglesias from Alexander Schneider indicating that Pablo Casals had selected her to perform as a soloist in a series of concerts he would conduct in the 5th annual Puerto Rico Casals Festival.

Program of Olga Iglesias as soloist under the baton of Pablo Casals in the 5th annual Puerto Rico Casals Festival of 1961.

In 1958 Olga Iglesias made her debut in the second season of the Puerto Rico Casals Festival in Ponce, Puerto Rico under the direction of Richard Burgin, associate conductor of the Boston Symphony Orchestra. This was the first of multiple performances over decades in which Olga would sing as a participant of the Casals Festival. In July of 1960, Olga received a letter by renowned violinist and conductor Alexander Schneider, who at the time also held an administrative role for the Casals Festival. Schneider indicated that Pablo Casals had selected her to be the soloist in three concerts Casals was conducting in March of 1961. It was in these performances where she sang Donizetti’s “Regnava nel silenzio” from Lucia de Lammermoor and W.A. Mozart’s “No, no che non sei capace” from K. 419. In 1963, under Pablo Casals’ baton, she later went on to Carnegie Hall under the Casals Festival to sing in J.S. Bach’s St. Matthew’s Passion and in 1964 to sing in Haydn’s The Creation. These are two of three performances she sung at Carnegie Hall, in addition to many others under the baton of Pablo Casals and at the Puerto Rico Casals Festival. 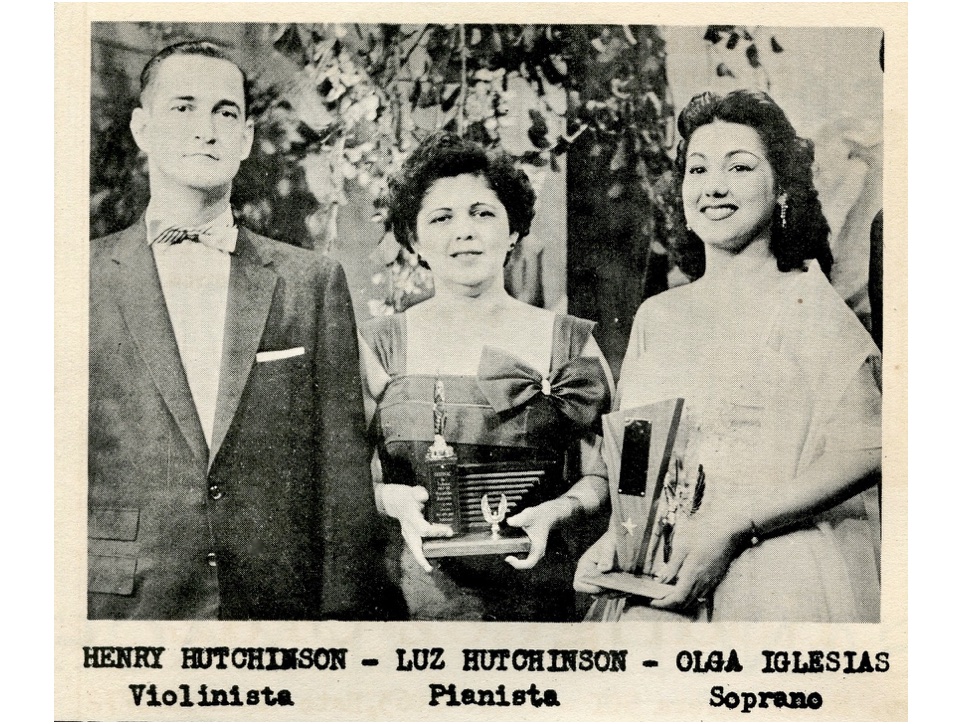 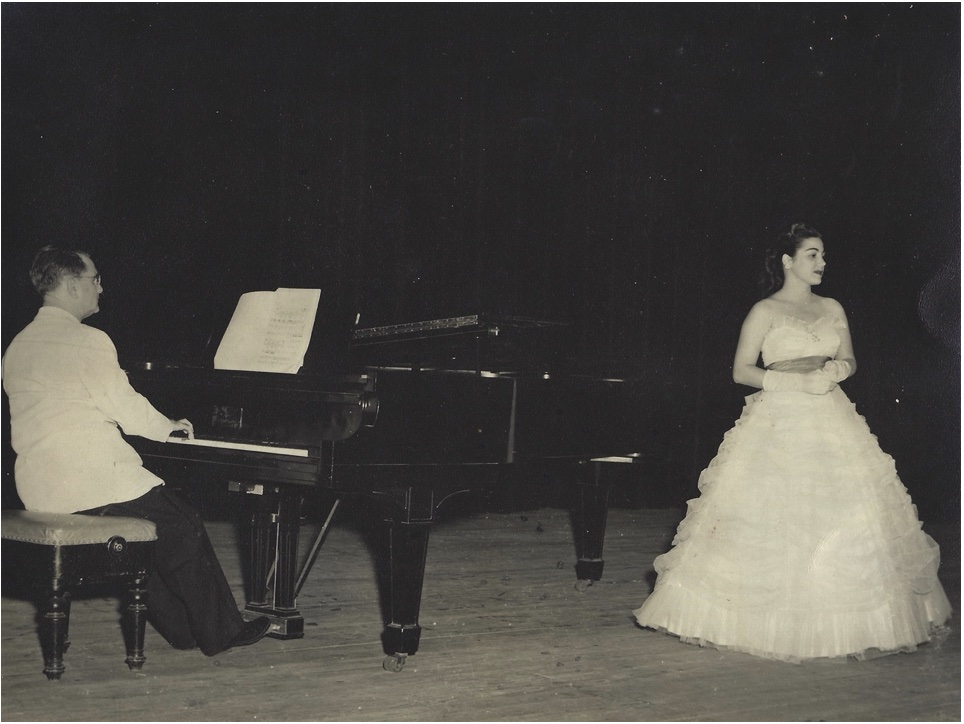 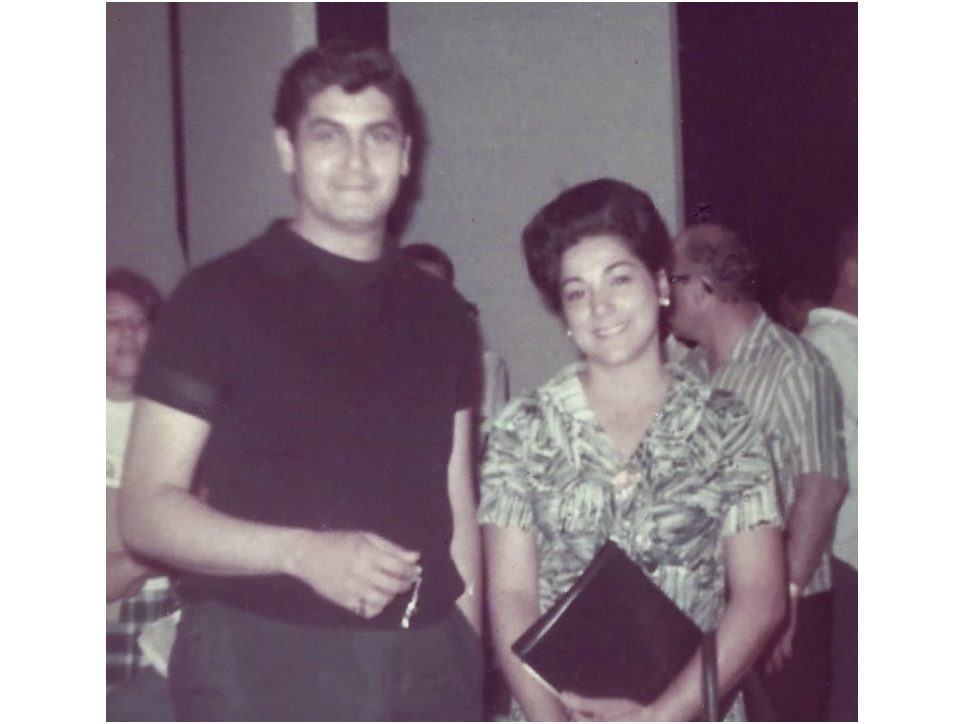 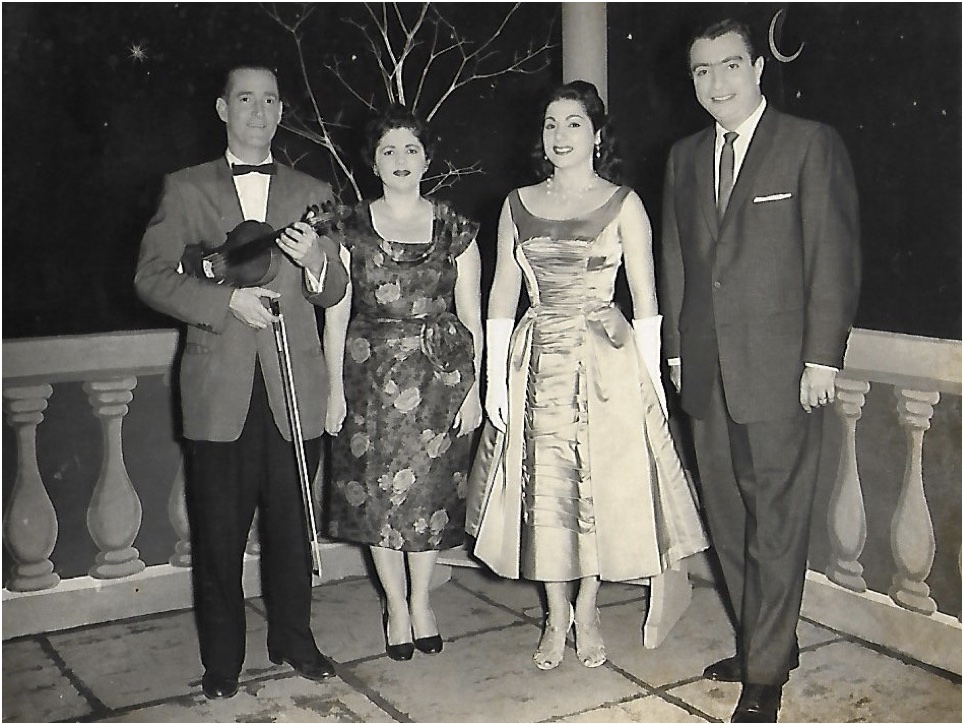 Beginning in 1960, Pablo Casals began to take his oratorio of peace, El Pessebre, across the world as conductor. Casals used El Pessebre as a vehicle to promote his message of peace. From the American debut in San Francisco in 1962 to its final performances with Casals serving as conductor, Olga Iglesias was the soprano who performed in El Pessebre the most. Such notable performances include the 1963 and 1967 concerts at the United Nations, the Athens Festival in 1966 held at the Herodes Attticus in Athens, Greece, and in Pablo Casals’ native land of Catalonia, Spain in 1967. In addition to these, with Olga Iglesias as soprano role, El Pessebre was also performed in Argentina, Mexico, El Salvador, Venezuela, Switzerland, France, the United Kingdom, Israel, Dominican Republic, Germany, and throughout the USA.

The August 1966 performance of “El Pessebre” at the Herodes Atticus in Athens, Greece.

The June 1962 performance of “El Pessebre” in Carnegie Hall. 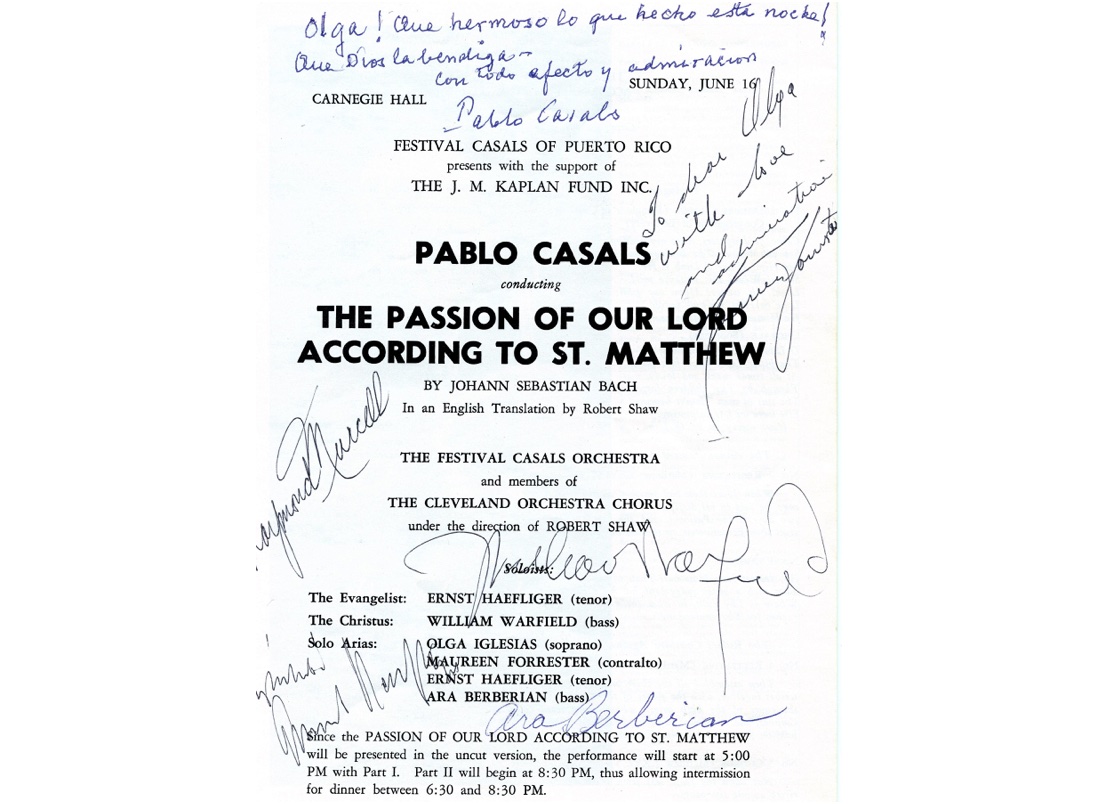 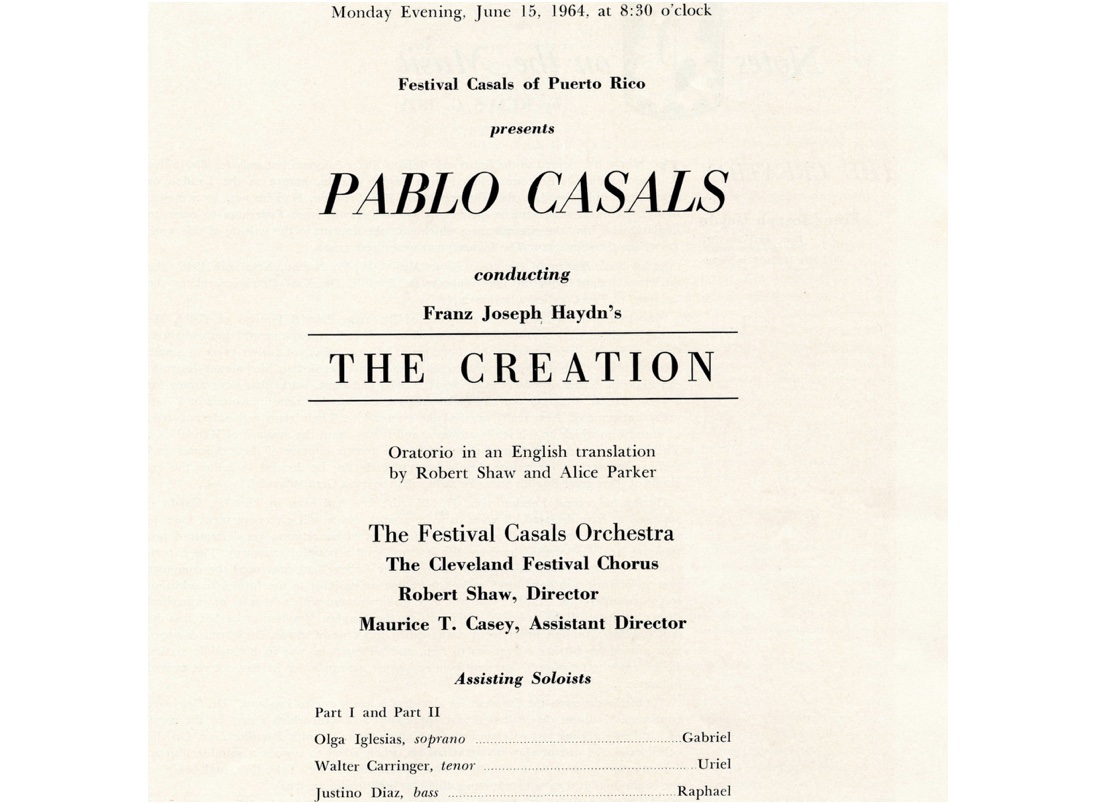 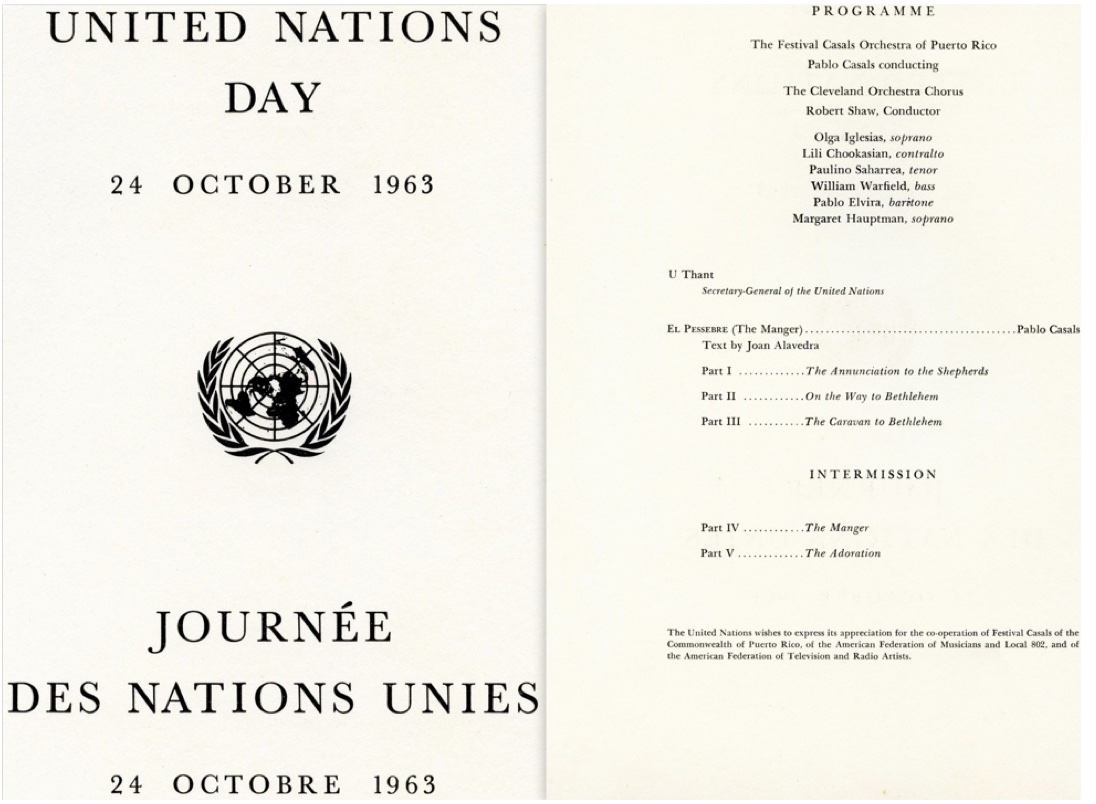 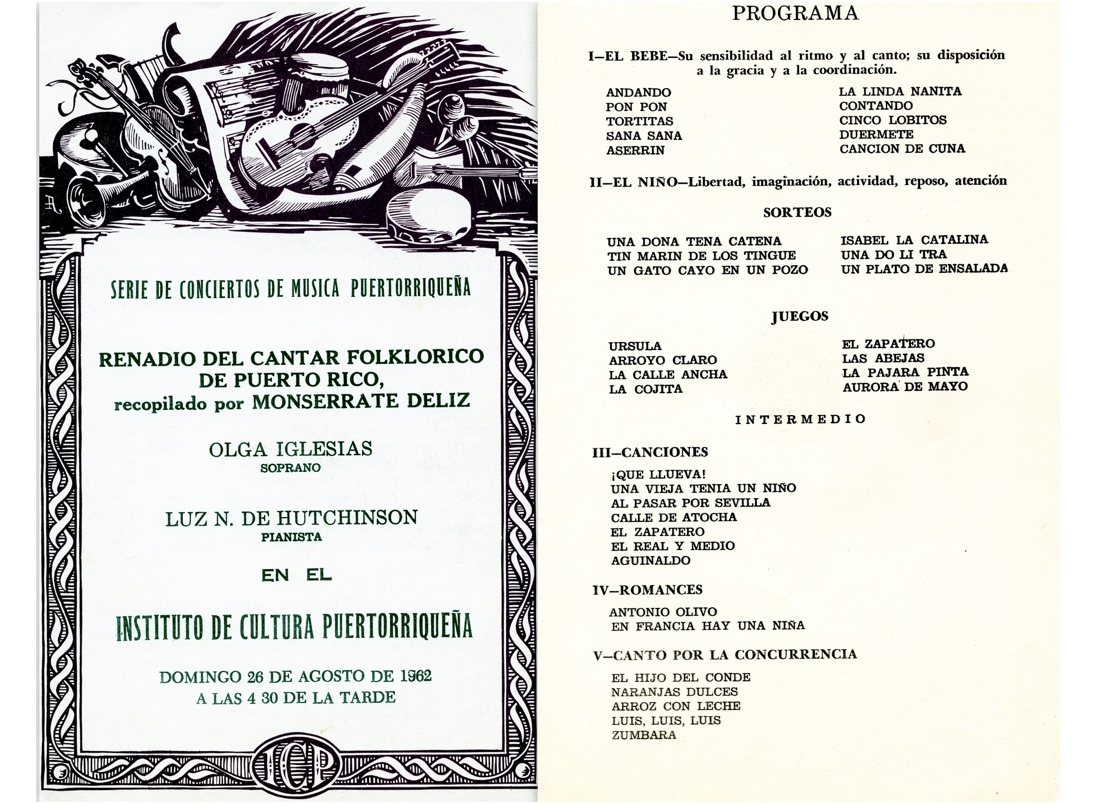 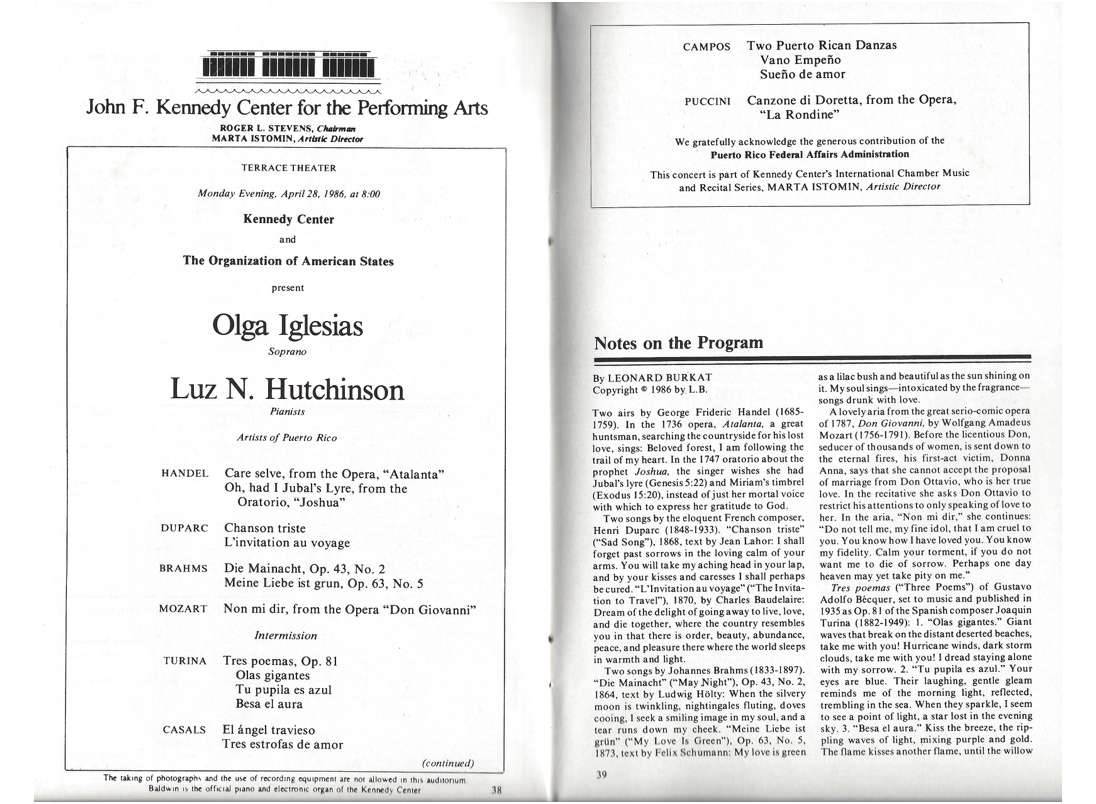 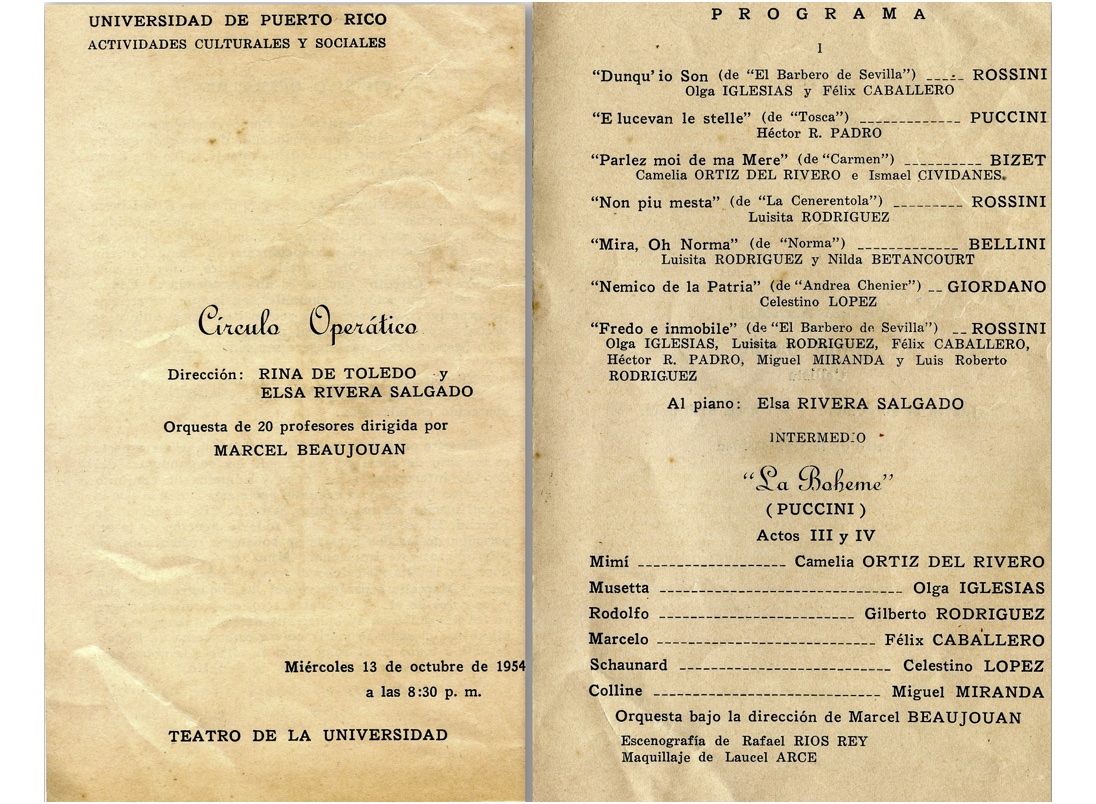 In 1965, with Rudolf Serkin serving as the artistic director of the Marlboro Music Festival in Marlboro, Vermont, Olga Iglesias received correspondence confirming her participation in said festival. Pablo Casals attended that summer as well, a frequent participant. In the summer of 1966 Olga Iglesias returned to Marlboro once again, but this time to actually record six of Casals’ art songs for Columbia Records (now Sony) with Mieczyslaw Horszowski on piano and supervision by the composer, Pablo Casals. This recording is still commercially available today.

Pablo Casals and Olga Iglesias performing his art songs at the Marlboro Music Festival in Marlboro, Vermont in 1966.

After Pablo Casals’ death in 1973, Olga Iglesias continued to perform in the Puerto Rico Casals Festival, to appear with the Symphonic Orchestra of Puerto Rico, and also to continue singing under the patronage of El Instituto de Cultura Puertorriqueña among others. One of her final public concerts was performing at the Kennedy Center in Washington, D.C. in April 1986. Apart from performing, Olga Iglesias belonged to the 1964 first graduating class of the Conservatorio de Música de Puerto Rico, and after completing her post-graduate studies at said institution, she transitioned to the role of professor and ultimately head of the voice department by the mid 1970s. 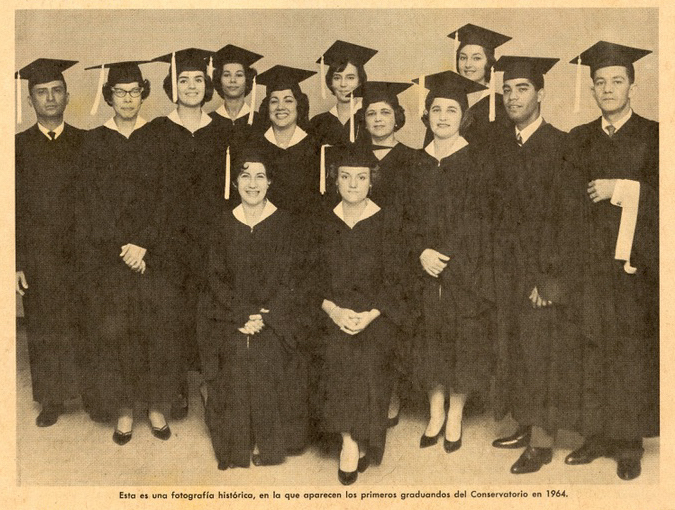 Photo of the Conservatorio de Música de Puerto Rico's first graduating class of 1964 with Olga Iglesias and Luz Hutchinson in the center. 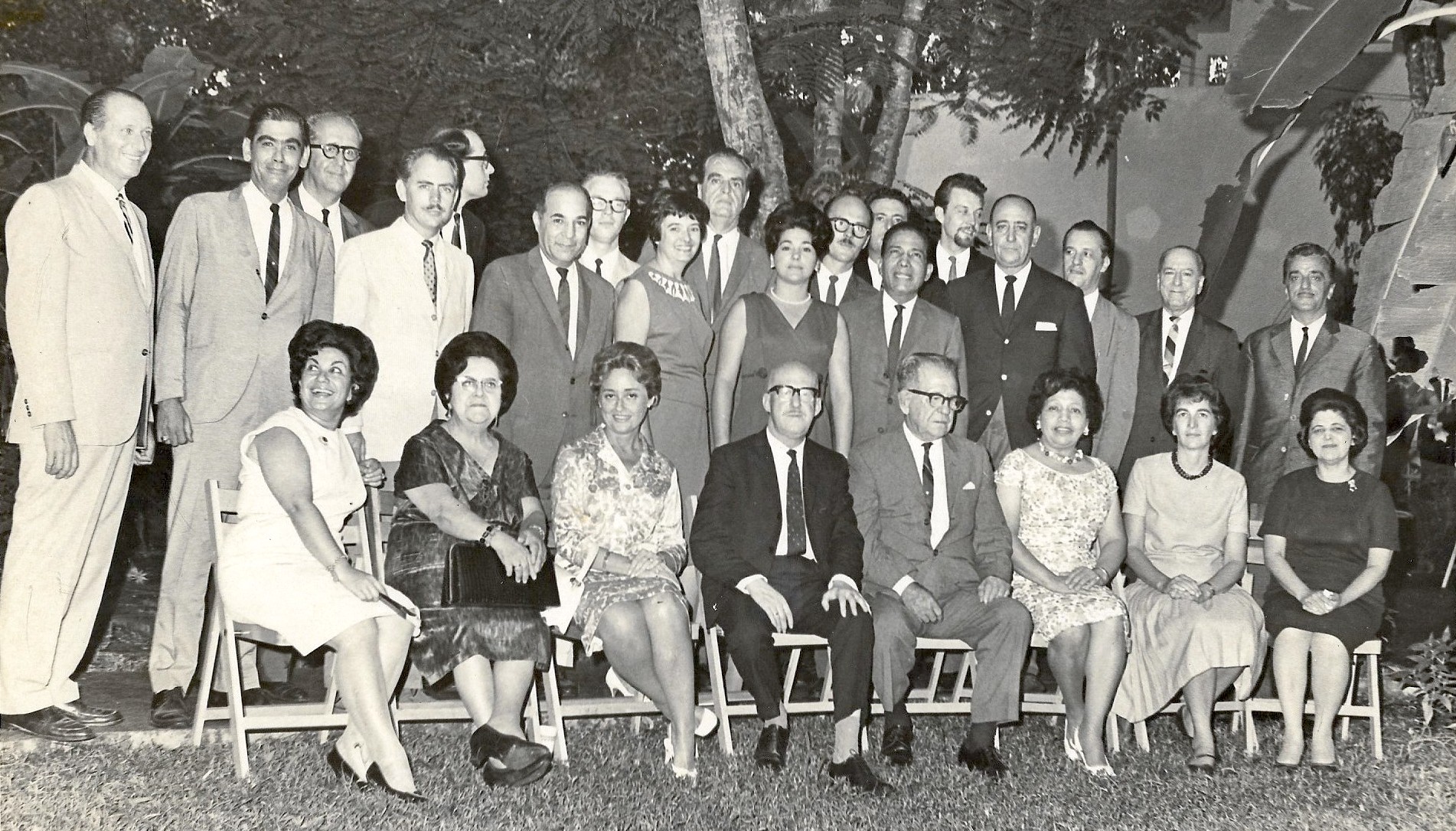 Olga Iglesias passed away on May 26, 2013 in Hollywood, Florida having contributed to the Pablo Casals legacy as well as to the classical music scene of Puerto Rico. Surviving her was her high school sweetheart and husband, Robert I. Cheney, her only child, Robert I. Cheney Jr., two grandchildren, and one great-grandchild.

1956 cover of Olga Iglesias’ debut album “You Are Always in My Heart” with José Enrique Pedreira on the piano and José Raúl Ramírez on the orgam.